109,157 HARRINGTON members around the world 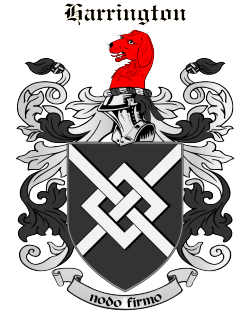 Design your own HARRINGTON Family Crest

This long-established name is of Anglo-Saxon origin, and is a locational surname deriving from any one of the places called Harrington: in Cumberland, near Whitehaven; in Lincolnshire, near Spilsby; and in Northamptonshire, near Kettering. The place in Cumberland, recorded circa 1160 as "Halfringtuna, Haverinton", is so called from the Olde English pre 7th Century byname "Haefer", from "haefer", he-goat, with the suffix -ing(as)", denoting people, tribe of, and "tun", settlement, enclosure. Harrington in Lincolnshire is recorded as "Harinton" in 1202, and is named with the Olde English "haer", stony ground, with "tun", as before, while the Northamptonshire Harrington, recorded as "Arintone" in the Domesday Book of 1086, and as "Hetherington" circa 1100, is so called from a derivative of the Olde English "haeth", heath; hence, "the settlement of the dwellers on a heath"...

A locative name from the parish of Harrington, in Cumberland, corrupted from Haverington, supposedly from Haver, in Dutch, Haber, Teutonic, oats, in a field, and ton. Signifying a town in or surrounded by oat fields.

Alternatively, the first element may have been Old English hæring ‘stony place’ or haring ‘gray wood’.

Another Irish reduced Anglicized form of Gaelic Ó hOireachtaigh ‘descendant of Oireachtach’, a byname meaning ‘member of the assembly’ or ‘frequenting assemblies’.

Thomas Harrington, an English convict from Staffordshire, transported aboard the "Asia" on 3 September 1820, settling in New South Wales, Australia.

In 1881, the surname was prevalent in Essex and London but also further North in Lancashire. It was also a top surname in the parish of Bristol located in the county of Gloucestershire.

In 1891, the surname was recorded in England and Wales with 6,072 occurrences and a few 9 occurrences in Scotland.

Robert George Harrington (1904 – 1987) was an American astronomer who co-discovered a number of comets, including periodic comets 43P/Wolf-Harrington. In 2019, the comet will pass within 0.065 AU of Jupiter, effectively lifting the perihelion point and increase the orbital period to 9 years.

Another noted, Richard Charles Harrington (1956-2004), a British physician and psychologist and professor of child and adolescent psychiatry at the University of Manchester.

Pádraig Peter Harrington (b. 1971), an Irish professional golfer who plays on the European Tour and the PGA Tour. He won three major championships: The Open Championship in 2007 and 2008, the PGA Championship, also in 2008.

Tell us about any famous HARRINGTON (or surname variant) you think we should add here. We will get our genealogists to check them out and add them to the list. Thanks!

Join the conversation with the HARRINGTON tribe

Have spent decades looking for roots as dad was adopted by Beard family. My great grandmother was Mary Ann Harrington who married Walter Head from Ludlow UK. Her parents were Patrick and Catharine Lyons (St Finbarrs Cork) who met and married in Stepney London circ 1848.Patrick was from Coolcoulaghta Muinterverra and son of John Harrington and Catherine Hurly born 1825 baptised Durrus ..............I don`t get any Harrington response from the Sheeps Head Peninsular so maybe all emigrated? Any other descendants?

Areas of Origin for HARRINGTON

Write an email address and click 'Invite' to share this page with more members of the HARRINGTON tribe.

Discover where the HARRINGTON Family members live around the world

Show off the HARRINGTON Family Crest…